(The) Dodd from Nenthead (April)

DODD – a hill with a rounded summit

There are many ‘Dodds’ in the North of England but “The Dodd” is here in the North Pennines.  Not that it can claim to be the highest Dodd however it is the most northerly Nuttall in the North Pennines east of the South Tyne Valley.  It also has a summit cairn although not actually at the highest point!  Moreover for those wishing to visit the summit or the cairn a slight detour is required as the footpath over The Dodd only goes within a couple of hundred meters. 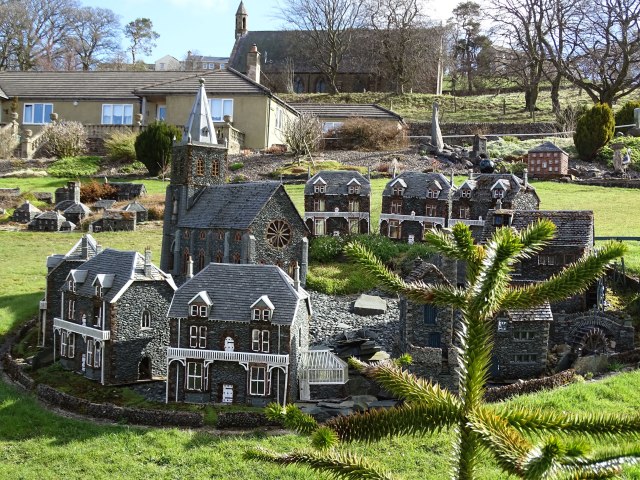 The walk starts in Nenthead, as it ends, along a section of Isaac’s Tea Trail.  The outward leg is along the Alston section and the inward leg along the section from Allendale.  Shortly after leaving the main road the path passes the celebrated ‘model village’.  Although not open to the public this remarkable accomplishment can be admired from the public footpath.

Shortly before Nentsberry the route leaves Isaac’s Tea Trail and heads up on to the moors.  Crossing a minor road one goes through a gate and on to open access land.  For the general rules regarding walking on open access land and for any temporary restrictions see

and for any specific temporary restriction consult

and type “Whimsey Hill” in the search box.  In general dogs are allowed on public footpaths through open access land at all times provided they are kept on a lead.

Moreover this walk is on public footpaths throughout.

The route climbs up to Hunter’s Break and then past the disused mine on Wellhope Moor.  Although the mine itself is no longer in use the buildings are still used not by mine workers but by those out shooting.

The path continues to climb up and round towards the Dodd.  From here the views are 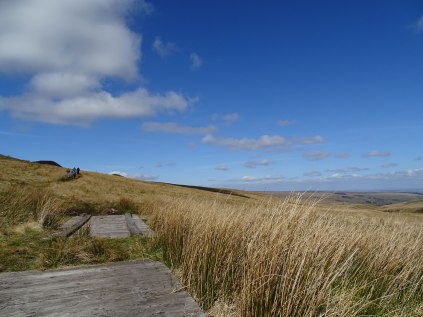 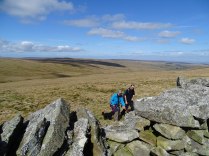 impressive in all directions.  In particular looking over towards Hartside a distant Lake District peak can be seen through the gap.  A lengthy discussion then ensued.  Which peak?   A subsequent study of the relevant maps together with several geometrical calculations convinced the author that it had to have been Skiddaw.  It is also possible that Great Calva and Bowscale Fell are also visible to the left and right respectively of Skiddaw.

To summit or not to summit, that is the question.  As the path levels out as it skirts the summit at roughly its highest point (grid ref: NY 79260 45680) those wishing to visit the actual summit should head of at right angles to the path.  The summit is a mere 200m away and a mere 10m or so higher but beware as the cairn is not actually at the highest point!  Also note that there is no path here.

From here it is downhill all the way with the route soon rejoining Isaac’s Tea Trail.  The locals are also friendly.